The Real Mother of Marilyn Monroe

Cast: Flloyd Kennedy Fernanda Mandagará Leanne Shorley Director: Ramiro Silveira About the play: Gladys Baker is acerbic, manipulative, witty - and demented. Her daughter Norma Jeane, the most famous woman in America, is fragile, desperately needy and harbouring impossible dreams. Their encounter is painfully raw but also humorous - of lives touched by the likes of Jo di Maggio, Clark Gable, Arthur Miller, John F Kennedy - personalities we know through a thousand black and white images and the distorting prism of celebrity and of legend. Like Marilyn Monroe herself. Armando Nascimento Rosa plays deftly with legend, both ancient and contemporary. In “The Real Mother...” we could be in a photographer’s dark room, watching a picture emerging in the developing fluid from the confusion that is the minds of these two women. But reality becomes increasingly elusive, events appear to mirror each other, make-believe can be a dangerous game and history stalks outside the walls, getting closer all the time. The only certainty is that gunshot. Dallas, November 22nd 1963.

The Tropicalia Island at VAULT Festival

Where to catch me up! (June/July/August)

The Tropicalia Island at VAULT Festival 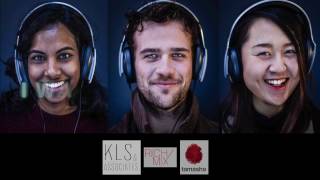 I Walk in your Words

The Tropicalia Island at ZOO Firsts

The Real Mother of Marilyn Monroe